(This review was originally published on www.frieze.com in June 2010)

Manuel Borja-Villel’s latest strategy to reinvent the Museo Reina Sofía sounds just as crisis-friendly as it is promising: inviting a roster of noteworthy artists to curate a series of shows using the permanent collection –18,000 pieces and counting – in what looks like a remake of MoMA’s successful ‘Artist’s Choice’ programme, which began in 1989. Accepting the invitation of Reina Sofía’s chief curator, Lynne Cooke, the Italian-born, Berlin-based artist Rosa Barba has recently inaugurated the first instalment of this new scheme. The resulting exhibition, ‘A Curated Conference’, revolves around the metaphor of the exhibition as a conference, the gallery being the stage and the artists the ‘speakers’.

The idea of the speaker turns out to be quite relevant in this two-room display, as the works communicate in true conversational style. The first room has a big indexical diagram that Barba – who has chosen not to show any of her own work despite being part of the collection – designed as a declaration of intent. Alongside this diagram, subtle and restrained works by Lili Dujourie, Mira Schendel, Francis Alÿs and Joëlle Tuerlinckx fill the small opening room, which feels somehow silent and preparatory.

It’s in the second, main room, where the ‘chatter’ begins: the clatter of 16mm projectors interacts with the muffled soundtracks of video works shown on TV monitors and large screens. Here, the individual legibility of the works is not a priority. All the voices are meant to be experienced as a multiple, uneven clamour. Even the black-screen pauses, the silence between the pieces, have been technically programmed. Nothing is left at random: that David Lamelas’ everyday experiments in To Pour Milk into a Glass (1972) clatter exactly opposite Paul Sharits’ Word Movie (1966), or that Gordon Matta-Clark’s burlesque acrobatics in Clockshower (1973) take place to the relentless hammering soundtrack of Joan Jonas’ Vertical Roll (1972) is no coincidence. Two pairs of monitors are scattered in the room, each of them dramatizing their own male-female conversation. In one pair we find Yvonne Rainer versus Guy Debord. On the other set, Valie Export’s Syntagma (1983), a meditation on female representation, cinema and subjectivity is coupled with a selection of Nam June Paik’s videos of early performances. 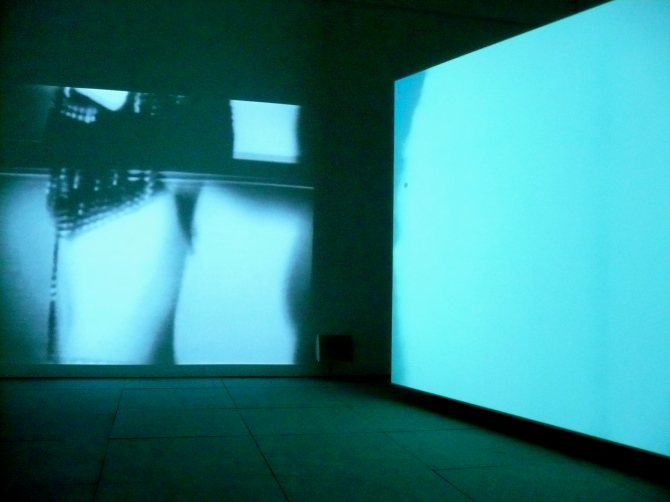 Out of forty pieces that made the final selection, twenty belong to the moving image format, split between three big screens with DVD projections, four TV monitors and three 16mm projectors right in the middle of the room, each of them placed beside Carl Andre’s Magnesium Copper Plain (1969), a self-reflexive token of Barba’s own use of celluloid projectors as sculptural devices in her practice, highlighted here by its pairing with such an iconic minimalist work. Highly choreographed in phenomenological terms, ‘A Curated Conference’ oozes the nuances and plastic concerns typical of an artist. Barba’s first experience as a curator shows an obvious fondness for the seminal figures of film and video practice from the 1960s and ‘70s, as well as for the ideals of the Fluxus movement. What is not so evident in its first reading is that most of the pieces on display share a humorous or ironic look at both life and art. 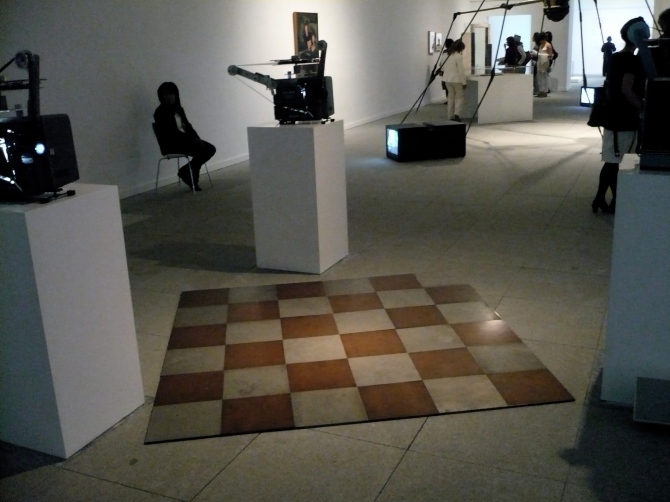 Barba has confessed she seized this opportunity to explore works relevant to her practice, so it’s easy to understand why so many works here are in 16mm (some of them transferred to video). But there is more to it than personal delight, as one can sense a sincere engagement in bringing together the collection and its audience, resulting in this subjective and exhilarating lesson in 20th-century art history.

Photography is present through works by Cindy Sherman, Tacita Dean and David Wojnarowicz’s poignant Arthur Rimbaud in New York (Duchamp) (1978–9/2004). And, bearing in mind the institutional context, there is also a selection of Spanish artists, from Picasso and fellow cubist María Blanchard to Antoni Muntadas and the sculptor Cristina Iglesias. We can even witness a silent drama taking place between two works: Marcel Duchamp’s The Bride Stripped Bare by her Bachelors Even (The Green Box) (1934), a compilation of the preparatory sketches and notes for his Large Glass, is displayed in a cabinet underneath Louise Bourgeois’ Spider (1994) – the menacing arachnid becoming an ingenious embodiment of Duchamp’s dominant and dangerously erotic ‘bride’.