They say stoicism’s cradle was Greece, third century BC. A long time and a long way from contemporary London, a city where just the perils and anxieties of commuting to work in the morning (if one was lucky enough to have one of those) are enough to make anyone loose the will to live. With enough stoic disposition, however, London offers any devoted artistic sufferer enough thrills to make this kind of pedestrian miseries very much worth her while.

Last week, in the space of just one day, I had the pleasure of consecutively visiting  two extraordinary exhibitions by two artists working within the expanded field of moving image, and whose specific particularities are just as fascinating as their meeting point: employing the projecting technology of their images as an active and essential part of the works, adding a heavy layer of theatrical and sculptural qualities to their installations. 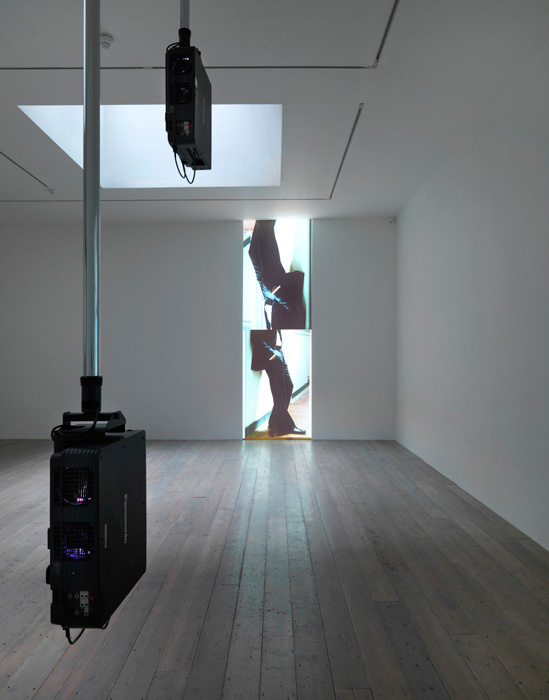 The first stop was of my pilgrimage was Rosa Barba’s show at Tate Modern’s Level 2 Gallery. Barba’s practice has come to exemplify the current and ubiquitous come-back of the celluloid projector –clattering sound and flickering light included– to the gallery and its pervasive re-incorporation to the lexicon of artists’ films in the last few years. Her inclination for the 16mm and 35mm paraphernalia and sculptural use of modified projectors (John Cage and his ‘modified pianos’ quickly spring to mind) has won her as much international acclaim as her carefully crafted films. 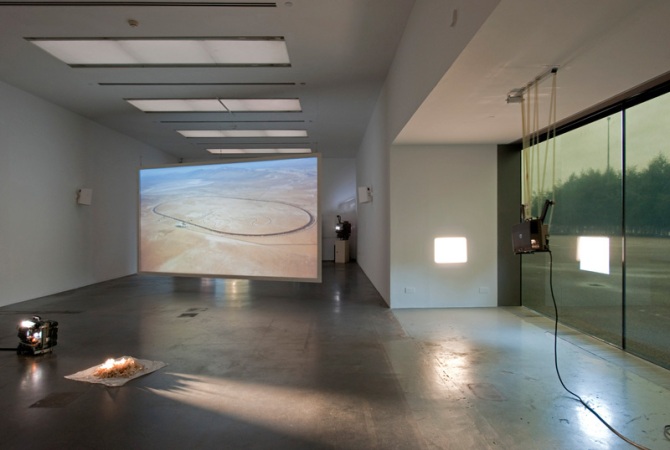 On the other side of the river Thames, in the sophisticatedly stripped-bare Victorian house that is Raven Row, the British artist Hilary Lloyd gives yet another master class on her use of projecting equipment as decisive part of the works mis-en-scéne. What makes Lloyd’s particularly striking to the eye these days is her utter embrace of the digital technology. In a moment where Barba’s nostalgic and predominant discourse could be understood as the triumph of the obsolete, a longing for the archaic and a sort of fetishism for retro textures, Lloyd’s unapologetic endorsement of state of the art gear feels like very fresh, almost optimistic, position to take.

Moreover, she not only plays with digital projectors. Huge plasma screens, dvd players, speakers and even the poles that hold them in place are all exquisitely choreographed in groups of slightly menacing art-machines. The apparatus are so important and specifically chosen that they are enumerated in the description of the works. For Lloyd even the cables –whose exhibiting fate usually involves being obliterated and hidden under wall-matching gaffer tape–  are also worthy material: they are painstakingly arranged in geometrical and very visible lines crossing the ceiling and forming strict patterns that would probably overwhelm fellow cable-lover artists like Alberto Tadiello. 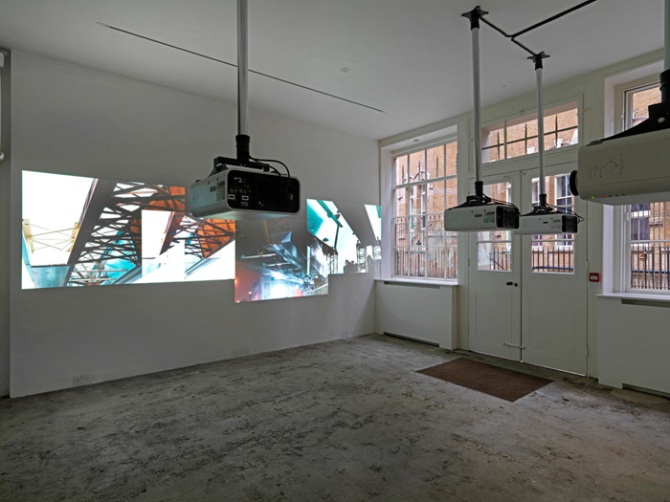 Obviously the ‘spot the difference’ game between these two artists is only sustainable and entertaining on a formal level. Content-wise their preoccupations and the language chosen to talk about them are miles apart. Lloyd’s works at Raven Row employ video, photography and slides to create a hybrid result which could be defined somehow as ‘moving collages’. Motorway and Man, for example, play with composites of four and six moving images respectively –whose movements are more or less evident– and that force the viewer to find a suitable viewing spot between the bunch of projectors, hanging from the ceiling to the viewer’s body level. They are not only very present, they are almost intrusive.  Their strict and symmetrical placement only helps to reinforce the sense of control and restrain that Lloyd seems to exert on her works. Motorway depicts a series of girders to a soundtrack of passing cars, and Man shows images from an male underwear ad, cropped to the groin area. Interestingly, both works result just as cold and asexual. Metal and human body are both treated as objects, mere raw material for visual compositions. As are the crane and the man’s legs of Crane and Trousers, two diptychs in movement with serious hypnotic appeal. 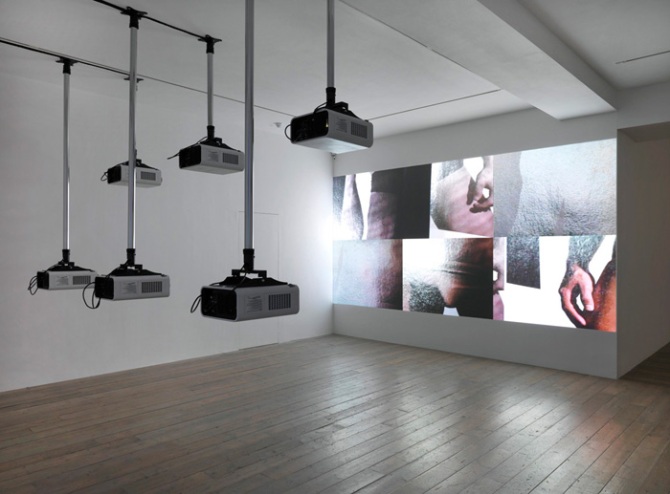 This is Hilary Lloyd’s (Halifax, 1964) first large scale exhibition in London in 10 years. An artist’s artists, she remains fairly unknown for the wide public despite having had solo shows at Tramway (Glasgow, 2009), Munich Kunstverein (2006) or Chisenhale Gallery (London, 1999) and being represented by Sadie Coles HQ (London) and Galerie Neu (Berlin). She is a rara avis in the contemporary art world who, despite obvious talent, shied away early on from the temptations of a quick but short-lived recognition in favour of a slow development of her style and unique voice. Clearly a long-distance runner, the press release for the exhibition reveals she has been preparing this show for three years, since the very inception of Raven Row.

Rosa Barba (Italy, 1972), on the contrary, has been a permanent fixture in the contemporary art scene in the past few years, including shows at Birnbaum’s Venice Biennale (2009) and his Torino Triennale, 50 Moons of Saturn (2008), this year’s Liverpool Bienial, Centre International D’Art et du Paysage (2009) and Stedelijk Museum amongst many others. Her practice oscillates between narratives, where she delicately weaves fact and fiction, as seen on Outwardly, from Earth’s Centre (2007), o fluxus-inspired films where textures and languages are the protagonists, like It’s Gonna Happen (2005) or Let Me See (2009). Mapping is also one of he recurrent concerns. Her resolute use of archaic equipment is perhaps a tool of critical nostalgia, a refusal to reckon some of the aspects and implications of current film making as an artistic practice. In that case, Lloyd’s  is an audacious refusal of any nostalgic reminiscing about the “good old days”.  Two different strategies to help us explore the way we look at things and how we navigate our way around them. Isn’t it exactly why art is such a thrilling pursuit? 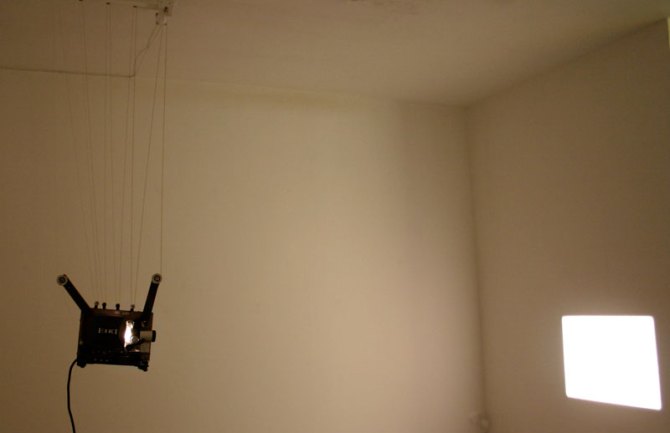