‘We are treating the Occupy movement as a landscape, and October as a representation of it, particularly of its global nature’, Thomson & Craighead tell me about their commission for the 2012 Brighton Photo Biennial. Since they are working in Scotland and I am in London, our conversation takes place on a sunny morning through Skype. Their voices break at some moments, their faces becoming briefly pixelated, evoking the precarious intimacy constructed by technology. This is, fittingly, one of the cornerstones of their artistic practice, through which they have been exploring the behavioural and communication shifts produced by the irruption of the internet on a social scale since the early 1990s. ‘We are not trying to provide any sort of interpretation and we certainly are not aiming at being “objective”, whatever that might mean … October could be perhaps best described as encouraging a specific mode of attention.’ 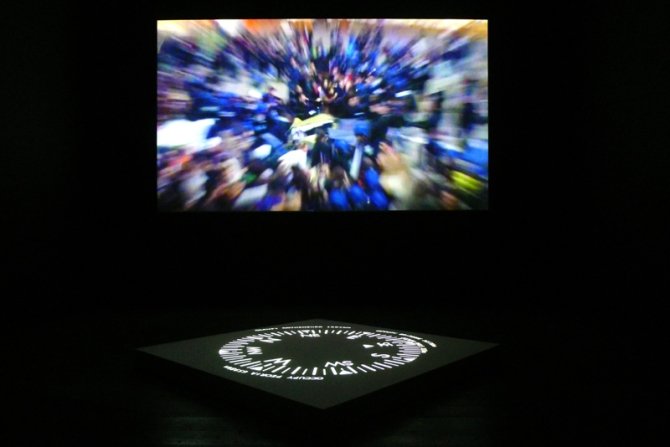 October, a 13-minute double-channel video, has a circular structure playing on an endless loop. It depicts two distinct phases of the Occupy movement. The first part gathers footage of what was dubbed the Global Day of Action, when the number of protests scattered around the world peaked on 15 October 2011. The second part gathers documentation of the eviction of hundreds of Occupy camps from all over the planet, which took place the following month. The second screen shows a digital compass that reflects the exact location and distance to the artwork of each of the images that we see, thanks to complex software. The compass, projected on the floor, places the viewer at the centre of the action, providing a powerful element to convey the global nature of the event. This sense of (dis)location is perhaps one of the most interesting aspects of the work.

Every image that we see in the piece has been found by Thomson & Craighead on the internet, uploaded by the people that recorded them. The material that Thomson & Craighead use is called, in technological jargon, ‘user-generated content’ or UGC. Their amateurish quality is the best token of its subversive potential: with the means to broadcast information now available to most individuals, the roles of the witness and the participant, of testimony and activism, have become increasingly intertwined, offering a kaleidoscopic vantage point from which to look at major-scale events. What we see in October is the Occupy of the ‘occupiers’, not the Occupy of the BBC, CNN or The International Herald Tribune. Has the act of recording become one with that of protesting? Is image-making the new method of uprising? These are only some of the questions that October throws at the viewer. With the majority of images currently coming out of Syria being recorded and made available by the rebels themselves, such questions are only going to become more pressing in years to come. 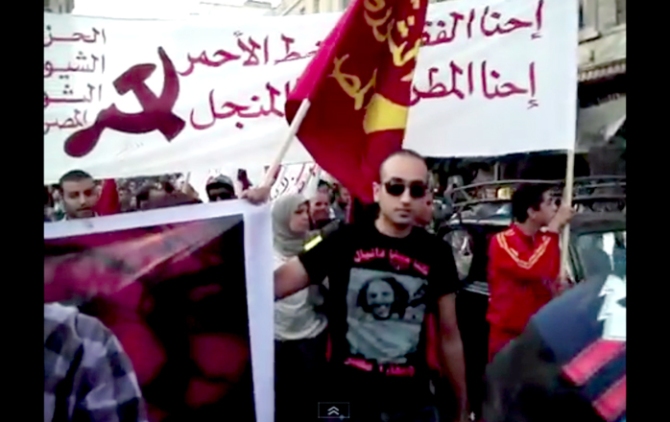 Technology remains the core concern here. Not just on a formal level but on a metaphysical one too. In October, Thomson & Craighead represent two types of transversal, or rhizomatic, flows. On the one hand, the artists mimic the key strategies used daily by millions of web users. By repurposing online found material, they are replicating actions such as sharing (YouTube, Facebook), re-blogging (Tumblr) or re-tweeting (Twitter): engaging in the endless circulation of information within the internet, where authorship, attribution and crediting are burdens, ghosts from a bygone past. On another level—as Alison Craighead explains—they are also representing how the Occupy movement itself mimics the particular structure of the web: ‘When you send a message through the internet, you can redirect it to and from different IPs to make it very difficult for the enemy to track and locate you. In Occupy they rotate their leaders constantly and they communicate their messages to far away points through various types of codes, so they are actually adopting the way the network works, its structure. By being so undetermined, the movement becomes really difficult to supress.’

October shares some similarities with a group of previous works by Thomson & Craighead, particularly the trilogy of ‘desktop documentaries’ formed by Flat Earth (2007), A Short Film about War (2009/2010) and Belief (2012). These works all seem to illustrate the human transformation from consumer to prosumer, fostered by technological progress and its increasingly all-available tools (the web, the camera phone, the blog). In that sense, they embody a rather recently found sense of empowerment, of agency. Instead of being swallowed by the deluge of information, prosumers contribute, and by this gesture place themselves outside the traditionally passive sphere of information consumerism. Interestingly, October depicts not only the Occupy revolution but also ways in which technology itself—the very tool by which capitalism managed to metastatically grow and to conquer the world—has also been the catalyst of its (potential, perhaps eventual) downfall.

October is a compelling watch, and sends one on an emotional rollercoaster ride of sorts. The first part oozes optimism and enthusiasm. There is a free-floating sense of hope and energy towards political change. But this is literally crushed in its second part, when we see the eviction of the camps, a set of images which definitely possess dramatic overtones. Thomson & Craighead have already expressed their interest in the documentary genre, especially the style known as ‘cinema verité’, in which the camera is always acknowledged as a means to capture the truth is its very essence. Although Thomson & Craighead reject the idea of using the work to send a subjective message, they are aware that the very structure of the piece contains a bias in itself.

October is about the early stages of an important protest movement and the technology that made it possible to happen and to spread to the global world. But it is also about the ocean of images that resulted from it. In 1977, Susan Sontag coined the term ‘image world’ to explore the rise in the production and consumption of images, and how this was in fact supplanting the three-dimensional world due to what she perceived as a weakening of reality. Thirty-five years later, Thomson & Craighead show us how a large group of people have reclaimed agency in constructing and inhabiting this reality by means of image-making, combined with other strategies. This is yet another twist to the politics and ethics of the image, but it is one that at least appears to give us a much needed sense of hope.

This text was originally published on the issue #19 of Photoworks, with occasion of the 5th Brighton Photo Biennial Agents of Change: Photography and the Politics of Space. October-November 2012

All images courtesy of Thomson & Craighead.