This review was originally published on Art-Agenda in July 2013

The group of sculptures gathered here feel like the remnants of some stranded explorer’s dedicated toil, the evidence of an island-bound prisoner bent on making the most of his imposed yet paradisiacal isolation. And it’s this placid, oceanic mood that dominates “Dreams Chunky,” Jack Lavender’s first solo show at The approach, amplified by the sunlit water pattern of the laminate mat that covers most of the floor of the first gallery. A suitably aqueous soundtrack fills the room unobtrusively, emanating from a retro-futuristic ghetto blaster that hangs from a metal chain, hovering over the plastic floor like a strange totem (Falling Waters,all works 2013).

There is an ethnographic quality to the young London-based artist’s work, and a slight nod towards the supernatural properties bestowed upon the material traces of foreign cultures, like in Melanesian cargo cults. An assembly of nimble assemblages of found objects, like flotsam washed up on the seashore. Yet on closer inspection, there’s a logic to their organization. Consider Dreams Chunky 3, for example, where a series of elements—including hooks, a paint tube, a glass leaf and glass bottle, plastic fruit, a dog toy, a crystal pineapple, and a Spiderman-printed canvas—appear ensnared in a metallic grid, like vulnerable fish caught in a net, their journey through some distant sea suddenly halted. Its composition, however, is carefully balanced, the disarrayed accumulation of objects harmonically brought back to order by the metallic structure, reminiscent of the wire mesh used to reinforce concrete in construction sites.

“Dreams Chunky” takes its name from a knitting pattern Lavender stumbled upon, and perhaps those grids are less fishing nets than dream catchers, trapping Lavender’s oneiric debris. This is particularly evident in Dreams Chunky 4, which features a striped hoop. The dreams, as dreams are wont to do, are never clarified, their specific idiosyncrasies fogged by that shared, generic title. Some hints to tidy this mental maze, however, can be gleaned from the fact that the core items of the sculptures are invariably mass-produced objects, the organic made artificial, from fake fruit and leaf-shaped ashtrays to plastic dog toys in the shape of tree trunks or sausages. 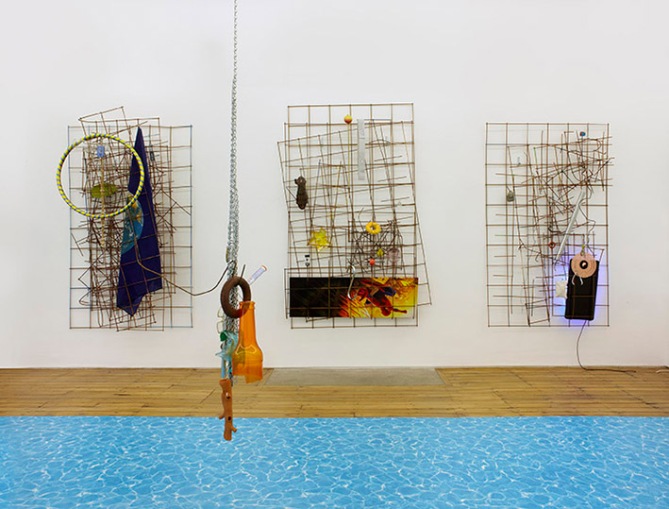 Exploring how nature is co-opted by capitalism as yet another commodity might be a well-trodden path in contemporary art, but there is something refreshingly earnest in Lavender’s transmigration of material banality to pagan transcendence. The sculpture White Magic, for instance, combines a pane of glass with stickers, a coral and a cast aluminium leaf where incense (made with “magical intent,” says the label) slowly burns while scenting the room. New Age tropes—turning to mysticism as an antidote against technologically-fuelled speed and consumerist exhaustion—have reached such established proportions in current discourses as to risk appearing contrived and flippant. But speaking to Lavender there is no trace of calculated irony. He tells me how his partner concocted the “magic” incense herself and how much he enjoys visiting Stonehenge and the book Robot and Meaning by Kai Falkman, an obscure self-help book published in 1982, an extract of which can be read in the show’s press release.

Lavender’s oeuvre suggests a quick and responsive gaze, trained as much by consuming images on the Internet as by finding interesting forms in the discarded objects littering the city’s pavements. “Recuperating the tradition of the assemblage and the prehensile alertness of collage, today’s sculpture seems to be less engaged in interrogating its own status than it is overexcited by the idea of annexing the whole world to its own body,” wrote Massimiliano Gioni in the curatorial essay of “Unmonumental,” his 2007 survey exhibition of sculptural practices at the turn of the twenty-first century. Lavender seems to share this annexing complex, hoarding found objects and rearranging them in new configurations of shapes and meaning. What sets his work apart is the almost obsessive use of a structural device—the grid—in most of the pieces, as well as an adept staging of the pieces within the space, creating an immersive experience without ostentation.

While showing me some eroded breeze blocks embedded in Dreams Chunky 9, the artist told me about growing up in a coastal town near Margate and how on weekends he would go to the beach and pick up stones, devising makeshift formations with them. His current practice doesn’t seem too dissimilar to that childhood hobby, I thought. It made me recall a passage from Claude Lévi-Strauss’s memoire, Tristes Tropiques (1955): “I like to wander along the shore […] gathering pebbles with holes, shells, whose geometry has been reshaped by the wear and tear or plant-roots twisted into chimera-like patterns, to make a private museum of all this flotsam and jetsam: for a while, at least, it is just as valid as any collection of masterpieces.”

All images courtesy of the gallery.